Okay , I have discovered the secret of Toronto ComiCon --- the sketch duel panels.

Back in 2018, I attended Toronto ComiCon for the first time. I had come into town mainly for Breakout Con (a super fun, super welcoming, tabletop gaming convention), but also wanted to spend time with my friend Aeryn (you know, the Aeryn, the one who runs Geek Life) and since she was going to ComiCon so was I. Though to be honest, she didn't have to twist my arm too hard to get me to buy a pass to ComiCon, as I've been a comic collecting geek since like 4th grade.

So here I am at Toronto ComiCon, wandering around with Aeryn, checking out the dealer hall and all the awesome cosplay going on, and she tells me that the one thing we need to do is attend a sketch panel.

Now, I had looked at the schedule for the con ahead of time, I had seen the sketch panels listed but completely overlooked it because the artists listed weren't folks I knew. I mean, that's for big fans, right? Why go to a panel when you don't even follow the artists' stuff?

However, I was locked in to go where Aeryn was going, so, sure, sketch panel. Why not?

We went and I LOVED every minute of it. Sitting in a pair of comfy front row seats, watching these three strangers sketch away while answering questions about their craft was extremely entertaining. There was also a cool thing going on where they gave out raffle tickets to everyone in attendance, and each piece of art that was produced was raffled away to the crowd.

It was super casual, funny and fun. Like an "Ask Me Anything" for comic book artists. I guess they usually do two different sketches, centred on two different silly themes.

Back in 2018, the second sketch that the artists on the panel did was of Archie characters as superheroes:

This year, again, I came into Toronto to attend both Breakout Con and Toronto ComicCon. Double dipping as it were. The only difference is this time as soon as the schedule came out I went through and circled the sketch panels. "So, we need to be there Friday night… because I see a sketch panel listed here for 6pm?" "Yep. Exactly."

There are other facets of ComiCon that I enjoy, but I still maintain that the sketch panel is the best part, and I feel like it's a hidden secret because somehow, shockingly, for the second year in a row, I attended a sketch panel where the room was not full. The front row was not full. There were plenty of empty spots. The hall probably could've held twice the number of people in there, easily.

And while I wasn't complaining about the front row seats, I was confused by the fact that it wasn't more packed. I mean if for no more reason than the chance to win a neat piece of original art, your greedy little heart should want to attend the sketch panels.

Plus, the entire thing is silly fun. The MC (Brent Chittenden from True North Nerds) calls out for sketch ideas at the beginning of the show. People are yelling out everything from favourite characters to locations or genres. "Buckaroo Bonzai!" "Hotdog stand!" "Condiment King!" "Costume swap!" "Conan!"

Then there's the Q&A, the casual chatter, as the artists answer questions from the audience and from the MC. The fact that these guys effortlessly carry on answering questions while sketching away (and producing some pretty amazing art) is a serious testament to their skills.

There were five different "sketch duels" scheduled through the weekend, including two special Family Zone editions (having not attended a Family Zone duel, I don't know for certain if they do the "give the art away" portion). Unfortunately, I was only able to make it to one.

The panel I sat in on this year featured Ty Templeton and Leonard Kirk. The entire tone of the conversation was "I probably shouldn't tell you this story, but I will…", as they discussed the comic industry, including everything from what kind of script they prefer to work with to silly insider dirt about "that one time so-and-so did this thing".

Someone from the audience asked about strange places that the artists had completed work in.

Leonard Kirk admitted to working in a pub and talked about the time he finished up a bunch of sheets of art while stuck in an airport with a delayed flight.

While Ty Templeton told a funny story about meeting a moose at 2 AM on a highway out in the Muskokas somewhere. Apparently, he had been staying with his family up in cottage country, all in a big one room sort of spot.

He had to finish up some pages but turning on the lights to work would've bothered everyone who was sleeping, so instead, he drove down the highway and parked under a light to pencil a couple of pages of Batman!

HOW DID THIS GET PUBLISHED?

Templeton and Kirk each gave a funny example of something they drew which they were surprised slipped past their editors.

Leonard talked about the time he was pencilling an issue of Alien Nation and in a back alley scene there was a wall covered in graffiti where he very boldly drew, "Call Tom for a good time!". Tom being his editor's name.

While the phone number included was the actual number of his publisher's office. Leonard was dismayed when this somehow made it to print.

The only saving grace was that the publisher had just moved offices the week prior to the issue being released, so he never knew if anyone tried to call the number.

Ty talked about his first pencil job for DC, working on Blue Devil. The script asked for "a collection of elder gods of the DC universe", so he drew the DC pantheon but then slipped in several Marvel gods, Thor, Odin, and Hercules, as a joke, assuming the inker would fix it.

Not only did the inker not fix it, he even coloured them spot on, so it's really identifiably Thor et all. And it somehow slipped past the editor. And they somehow didn't get sued by Marvel. (Editor's note: Hi! Aeryn here... I REALLY need to find this comic!)

Ty, who teaches a comic boot camp in Toronto, gave some advice to would-be comic book artists, "It's all about repetition of skill. Draw every day. Never say I can't draw. Or, I can't draw whatever specific thing. Instead, say I can't draw that YET. Like any skill, drawing gets better each time you do it."

At the end of the panel, as I was packing up my camera and getting ready to leave, I overheard a young kid from the audience ask Ty, "What is the most difficult thing you've ever drawn?"

After just a wee pause he replied,

"Oh, I've got one for this! Yes. I was supposed to draw a panel with an aerial view of the 1941 World's Fair. And I went all in. Did research. It was completely accurate, super detailed."

(Man, I want to see that! Would love to know which comic that panel appeared in!)

COMIC SKETCH DUEL PANELS, YOU WANT TO BE THERE

Overall, I was intrigued, engaged, and amused as I giggled at the stories that Leonard and Ty shared with us.

If you are at Toronto ComiCon (or possibly ANY comic con, though I have yet to test this theory), seek out the sketch panels. (Editor's note: Good question. This just might be a feature that can only be found at Toronto Comicon, as I haven't seen elsewhere...)

Park yourself for an hour, listen to some insider stories, get a chance at winning some cool art -- I highly recommend the experience!

Want more? Deanna wrote a fantastic post on The 7 Best Kept Secrets of Toronto ComiCon (I can't believe I missed out on the Pokemon! Doh...) 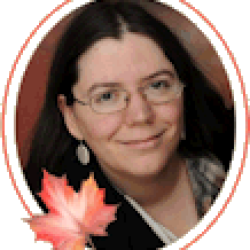 Content Developer at Maple Leaf Mommy
Deanna Tousignant is living the geek life. She runs a Canadian parenting site called Maple Leaf Mommy, where you can catch her writing about motherhood and family travel, as well as the occasional ode to comic books, board games or Harry Potter. She is also part of the team behind TabletopBellhop, a blog, podcast, and Twitch stream, that seeks to be the Dear Abbey of tabletop gaming, answering your gaming and game night questions.

Escape Room Review: Save the Dragons!

Finally, The Joker Will Have His Spotlight

Check Out The Four NEW VR Experiences at the VOID Toronto