That SWAT Hallowe’en Costume Looks Bad-ass, But What’s Missing Is a Skirt.

As part of the Get Spooky series, I had every intention of scouring the interwebs for the best costumes I could find for both kids and adults. I quickly realized though, all kids costumes are absolutely adorable. A kid could walk up in a garbage can, and I’ll probably squeal all over it and say, “Oooh, what an awesome Oscar the Grouch! So cah-ute!” So then, I went to the section of costumes I really wanted to look at: plus-sized Hallowe’en costumes. If nothing else, looking at these plus-sized costumes gave me a really good laugh today, which I just had to share with you. I didn’t think there was such thing as a sexy-Minion costume, but there is! Wanna see what else costume designers made sexy?

Where Are The Pants?

So here be some costumes that would have been epic… if they came with pants. You know how cold October is in most parts of Canada right? 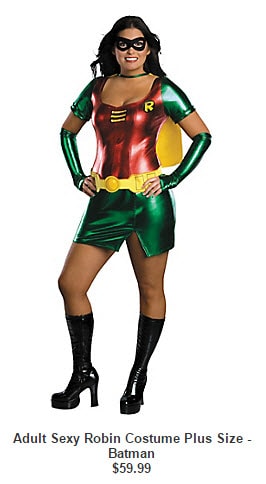 Let’s just forget the whole shiny thing going on here. At least half of a cape is missing, and where are the pants??  The Stephanie Brown Robin is the only one that had a skirt (which was red,) but even she wore green tights underneath.  The closest this costume comes to is either the original Robin suit, which was more or less a green speedo for the bottom, or the Carrie Kelley costume, with the same speedo. None of these many incarnations of Robin had heels. 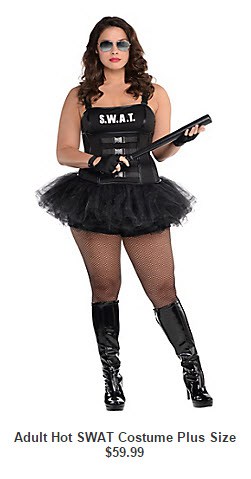 It’s like they took a Black Swan dress and added the letters S.W.A.T and some buckles….. 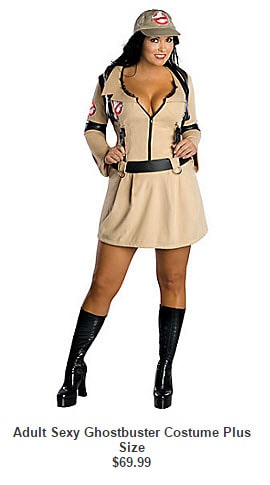 I’m thinking she’s hiding her ghost busting tools the same way some bustier women hide their cell phones….  It’s not quite like what the GhostBusters are wearing next year though, is it? And the fabulous Melissa McCarthy is a Ghostbuster in 2016. Somewhere down the line, they made a plus sized costume for the movie.

I SO cannot wait for this movie next year, woot! (Entirely shocked they’re not wearing heels though?) 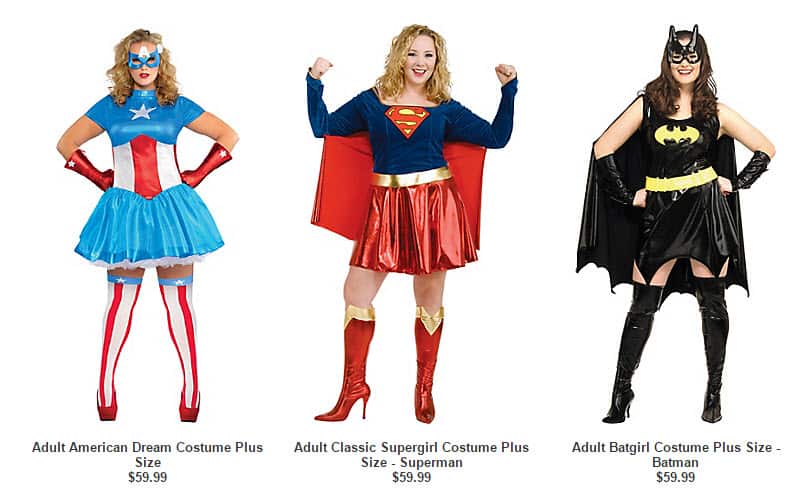 Supergirl and Batgirl, fine. Despite the heels, they’re not that far off from character design. What happened to Captain America though? Apparently it was so epically wrong, they couldn’t even get the name “Captain America” attached to the costume title, I guess. Does no one remember the Captain America USO girls?? It would have actually worked as a relevant, sexy Hallowe’en costume. Its even a perfect silhouette for plus-sized girls. 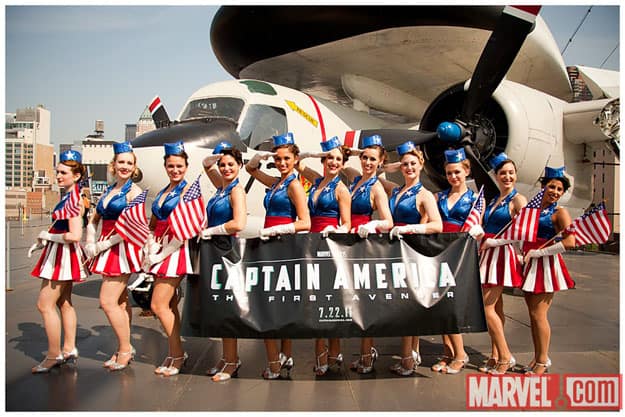 There Were No Female Minions 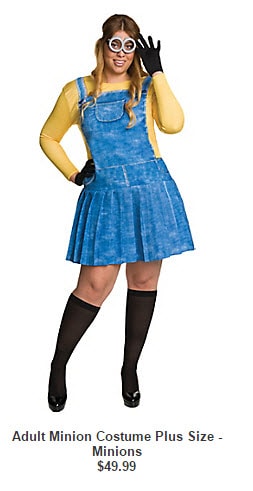 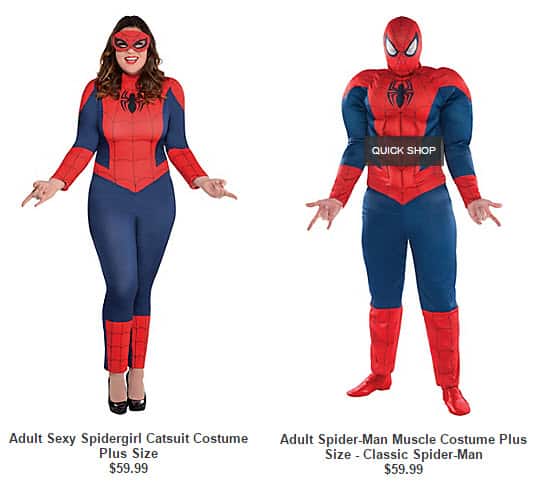 We have pants, YAY! For the Sexy Spidergirl, I guess they didn’t do too bad for an off-shoot character May Parker, but again, heels? And why not either variation of Spider-Woman instead? And the Spider-man costume looks like the Hulk is trying to hide underneath it.  Trying to decide if it would be rude of me to say that plus-size clothes don’t need extra padding like that. 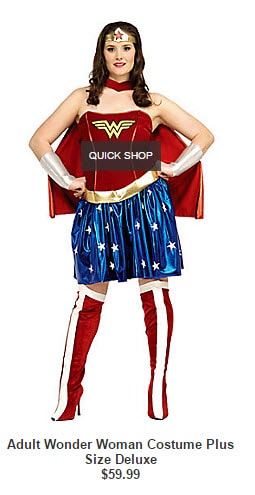 After all the “sexy” costumes shown for plus-sized women, this one made me laugh the most. This costume is much more modest than the bikini that the DC character actually wears. For Wonder Woman? This is something her grandma would wear.

101 Dalmatians Are Still a Thing 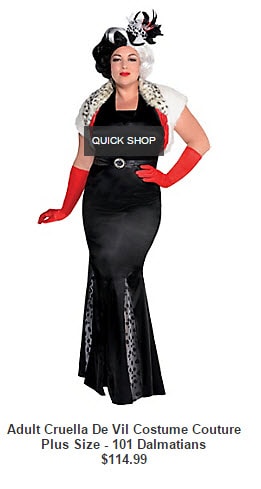 It’s been a while since 101 Dalmatians were on screen, but you can still find a beautiful Cruella De Vil costume to tribute the movie.

On the other hand, Maleficent was epic on screen not too long ago, and here’s a great costume to showcase your fangirl.

Is Piper The New Scary? 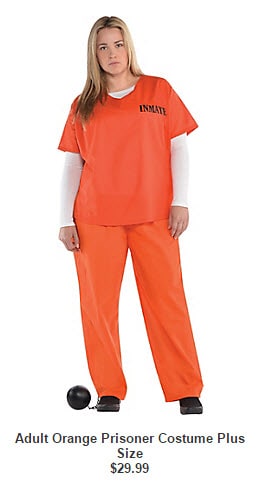 I’m assuming this is an Orange is the New Black costume, which is probably as close as you’re gonna get to the TV version. It’s missing the name tag, but that could be fixed with a trip to Staples I bet.

Ugh, Back to the Menswear Department

If you want scary? You’re gonna have to shop in the men’s department unfortunately. If I could drop that much on a Hallowe’en costume, this would be me as a tribute to my utter fascination with Squatchy “Reality” TV.  And is it wrong that I’m entirely curious how a costume designer could make a plus-sized woman’s sexy bigfoot version? Inquiring minds want to know!

That’s it for my Hallowe’en costume crawl. Do you have a costume yet? Who/what do you want to be this year?? 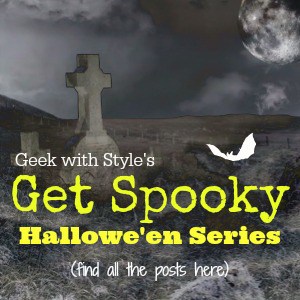 This post is part of Geek with Style’s Get Spooky series. Subscribe to the GwS newsletter now to keep up with the next installments.

That SWAT Hallowe’en Costume Looks Bad-ass, But What’s Missing Is a Skirt.