If you’re here as part of the Summer Biannual Blogathon Bash for 2013, welcome!  (If you have no idea what I’m talking about, you can check out the bash here!)  I hopefully have three interesting posts for you to view and work with, and some fun mini challenges to boot!  You can join in at any time, and if you still need to sign up to try to win one of the amazing prizes available this round, now is the time to do so!  Wishing you all the best blogathon bash ever! Have fun! 🙂 Okay, so I kind of backed myself into a corner when I set out to explain exactly why Vine is So Fabulous.  The only answer I can think of is, “It’s true! So there!”

What is Vine? OMG you have to ask?

Well, straight from the developers’ mouths… erm, fingers… “Vine is the best way to see and share life in motion. Create short, beautiful, looping videos in a simple and fun way for your friends and family to see.”

Let me see if I can wow you with some examples…

Imagine if I uploaded a YouTube video of the entire tall ship trip to the dock? And I made you watch it? That’s a lot of wasted minutes in our busy lifestyles to simply watch a boat come in on slow-mo. So… you’re welcome!  If that’s your thing tho, I also have a pot of water that will take time to boil, just watch and see!

And here’s another Vine vid I made quickly while making homemade pasta for the first time ever!  See? You can actually multitask with Vine.  It’s an addition to your blog posts, not a main event (which may or may not relieve some of the pressure of needing to make a vid.)
[tweet https://twitter.com/AerynLynne/status/346349539894104064]

Below is the very first Vine video I ever made.  Can you imagine how difficult it would be to try to describe what I got in the mail that day?  Does this truly explain it?, “I got mail, and screamed like the high-pitched girl that my inner-self is ’cause OMG my mail attacked me.” People may laugh and say things like, “How?” and then I’ll be left in a jumbled up mess of “It just did!” and advanced geometry and physics equations to explain the shape shifting projectile.

So once I stopped screaming, I grabbed my phone immediately, and made this…

At this point, I would like to apologize for my spelling/grammar on Vine, as well as to those who are still using dial-up, ’cause four videos on one post is probably not making your browser happy.  And its entirely extreme to have four videos running on one blog post, but I’m trying to prove a point here.

And that point is: a picture will paint a thousand words, but a six second video will paint the Coles Notes version of War & Peace.

If you’re not thoroughly convinced, maybe go study those first two videos again.  What do you see?  I see wind blowing through hair and flags alike.  It’s a beautiful day outside and definitely windy. Men, who can sing (better shown in the first vid), have climbed the main mast, and OMG they’ve climbed the main mast and they’re singing!

I didn’t worry about lighting, I didn’t need a script, I took out my Vine app’d smartphone and just shot a mere six seconds of what I saw.

The other really cool thing, if you link your Vine account to your Twitter, is that you can encourage people to: favourite that specific video, retweet it, even potentially start following you, if this is how you’re going to embed your Vine vids to your posts.  Got to wonder if a six-second video introduction is much more provocative than the 140 character tweet that people judge you on when they’re deciding whether or not to follow you.

Did I succeed in convincing you that Vine is what the cool kids are using?

Simply go to the specific tweet details (so that you’re on a page like: https://twitter.com/AerynLynne/statuses/341670143195222018 for example,) click on “More” and then “Embed Tweet”.  A new window will pop up with the code you need to copy and paste into your blog post’s text editor page! (Don’t paste the code into the HTML/Visual tab ’cause it won’t work that way.) 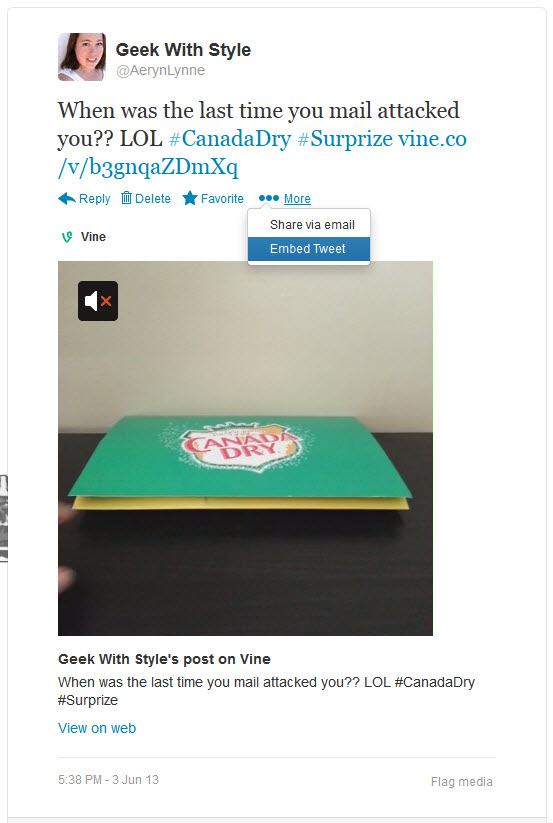 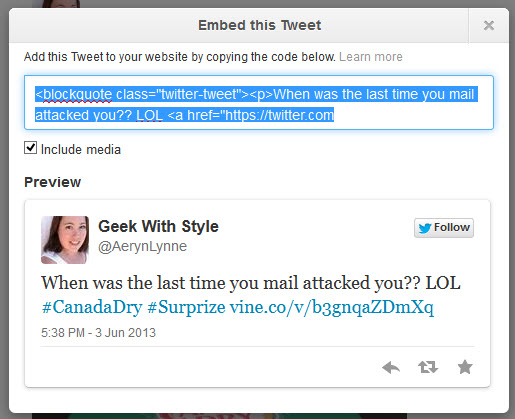 Every video you make is also saved to your phone’s hard drive, so if you’re not a Twitter user, you can grab your video off your phone and upload it to YouTube instead.

If you have an iPhone or Android smartphone, go download Vine (if you haven’t already) and record six seconds of awesomeness now.  Then create post and embed your Vine video!  Leave a link to that blog post in the comments below.  And if you don’t own a smart phone (WHAT?!) or its not compatible to this app, you’ll get a free hall pass on this challenge.

EDIT, June 21st 11:25AM EST: So instagram just updated their app today to include video posts (obviously to compete with Vine,) so now you have two options for posting video on your blog. No idea yet on time length, quality or audio as my phone is updating to the new version as I type this out.  What are your thoughts on this?

PrevPreviousDare to Go Nude this Summer with Rimmel London!
NextTips to Keeping Your Blog and Online Self SecureNext