I’m sorry, what? Plus-size women are the problem?

I just read an article that has my hackles up. Part of me thinks, maybe this is just an American thing? Plus-sized Canadians are well known border hoppers just to buy some affordable pretty clothes that fit; so plus-sized fashion lovers in the US do have some great clothing options that their sisters of the North are so very jelly of. Its not perfect in the US by any means, but it is closer. And now someone wants to lay the blame of lack of plus-sized fashion choices on plus-sized women. What sickens me more though, is that many plus-sized individuals are agreeing with McCall.

What do you think? Are Plus-Size Women the Problem With Plus-Size #Fashion? @styleit gives her opinion –> //t.co/ohmWQ1SL9X

I like to think that I’m not the pitchfork type; I don’t want to rally the troops and get a fire going, but I need my reading buddies to help me figure this one out. I’m flumoxed. Incensed.  I’ve walked away from my netbook four times now while writing this article out, ’cause I feel that I have to be missing something crucial to not be cheering loudly on this bandwagon, while many people that I admire are.

This quote from the article sums it up…

But as the saying goes, sometimes the only thing standing in your way is yourself. So what if the problem with the plus-size industry isn’t with faceless businessmen, but with the customers themselves?

Fashionista.com suggests that part of the problem is that women are not buying clothes as often when a plus-sized model is showcasing the style, compared to when a smaller model is used for the exact same garment.  Which could be true; I haven’t seen any stats to make an informed decision, but there are varying reasons as to why that might be.

Here’s part of the issue – we’re all ingrained to think that the smaller body is more aesthetically pleasing, and many plus-sized women will buy into the idea that the showcased garment will magically make them look just as slimming as well. It’s a subconscious thought, and one that the business side of the fashion industry is banking on.

Also, every body out there is a different body type, but this concept can be rather dramatic with a plus-sized model’s figure. There are many beautiful plus-sized models out there that definitely don’t have the same shape that I happen to have, and while the garment they’re modelling looks great on them, I know that I don’t have the same structure to pull the look off. So despite loving that dress/shirt/jeans/yadda on the model, I know it’s not for me.  But, if its harder to figure out how a garment is shaped, by draping it over a model of smaller stature, the plus-sized woman will most likely make the purchase, while being less informed of whether the style actually works for her or not.

So yeah, using plus-sized models can work better in favour of the client and not the business, so lets blame the client for wanting to be informed.

There is also discussion about plus-sized women not willing to lay down the big bucks for higher-priced designer lines; this leads me to believe that every single plus-sized woman out there is either dirt poor or just really cheap (sorry, but it must be true Oprah, Queen Latifah, and Melissa McCarthy.)  Again, this might just be my Canadiana shining through, but I’m paying through the teeth for regular ol’ clothes; I’m afraid to find out what higher-priced designer lines might cost.  Its an old OLD argument, so let me just briefly illustrate the results… 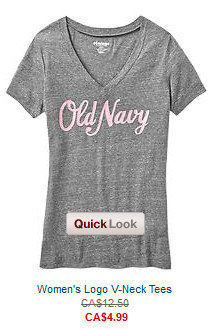 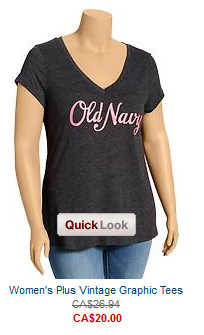 A $15 difference for a regular t-shirt; it’s a wonder why the Fashionista.com article discusses women handing over their credit cards for high-end designs, instead of simply cash (it’s ’cause we occasionally have to pay in installments to get clothes that we like to wear everyday.)  It would be nice if I could find a well fitting t-shirt at the same prices as the straight tee above, but I can’t. I’m the proud owner of more fingers on my hands than the number of clothing shops that are made available to my size in my area, and I live in a pretty busy city. Its not even a matter of where I’d want to shop, but more of where I can. So while a straight sized fashion lover could purchase five of these tees for $20 should she please, that same purchase would cost me $100. For five tees. If we’re not putting down the cash for high-end designer clothing, its because we’ve wasted our budget to ensure we’re not wearing the same clothes day in and day out.

Plus size blogger Sarah Conley, suggests that we should all buck-up and have our clothes tailored to fit our bods, just after purchase. And I love this idea in theory – there are many shirts that I’ve left on the rack because I would wind up with a fashion faux-pas similar to when Justin Timberlake met Janet Jackson on that stage one time, (and sorry, I just have to mention, Timberlake has an amazing plus size line called William Rast available at Addition Elle!) Essentially, I like my cleavage inside my shirts, but there are many plus size tops that are willing to show off more than what I have to begin with. If I did go to a tailor though, I’ve increased the price of a simple $49.99 shirt (plus tax) to somewhere along the lines of $65 or even higher; also, I’m actually not sure of where I could find a tailor these days, let alone one that I trust.

I honestly can’t fathom a moment when this section of fashion, on the whole, was happy. Ever.  We’ve been made to feel bad about ourselves with a medium that we can’t ignore. I can’t walk outside nude.  I need clothing, and for most of my life, my choices were either to look bad or to look worse.  Things are changing for the better, sure, but we have so far to go to find equality in such a simple pursuit as getting dressed to look awesome.

What horrifies me the most, as I stated above, is that there are numerous plus-sized fashionistas, both customers and industry insiders alike, that are cheering for this article.  Saying, “Finally, someone is speaking up!” and this sickens me. I really must be missing something.

I do get the marketing aspect of this article, well done Fashionista.com. Blog titles that rile up the masses, bring in more dough, (especially if you’re bombarded with width-encompassing ads throughout the article,) because they want to see if you really mean what your blog title suggests.  But also, congratulations on stepping all over a messy issue.  The fact that someone is fat is still a socially accepted ridicule, so way to go, bringing it home for those highly self conscious people out there; letting them know that its okay to speak out their self-hate on the heavier-set people around them.

There’s at least one comment in there that says, “Haters are gonna hate,” and I do. I emphatically do. That article creates an excuse for well established designer studios to say, “Hey, it’s not us, it’s you,” which is something we’ve been fighting so hard against for too long.

So, NO. It’s not okay to blame the plus-sized population for lack of fashion choices. That’s just disturbing.

I’m sorry, what? Plus-size women are the problem?